Speak with an MSP Backup Expert

Become an MSP partner and start offering cloud backup services to your clients.

How Can We Help You?

Search our extensive knowledgebase to get answers to your questions now.

NovaBACKUP specializing in providing local and cloud backup and recovery for managed service providers and professional offices with unmatched support.

View our product comparison guide for help determining which solution is right for you.

With the ongoing uncertainty around COVID-19, companies are being asked to work remotely and endpoint data protection has never been more critical.

Whether this Work-From-Home order will last a week or carry on into the summer is currently a hotly debated battle weighing the economy against the well-being of the entire population.  Both outcomes could unfortunately carry devastating and lasting effects.

We know that this is an extremely busy and challenging time for IT professionals and service providers.  Businesses have delayed or have frozen decision making, but their expectations regarding your service are still high.  The one thing that your business does not need at this point in time is further risk or complication.

If you would like to meet with one of our data protection experts, choose a time that works for you using the scheduler on the right.

Complimentary services for our valued customers:

Complimentary services for our partners:

Thank you for being a member of our extended family.

Do you have any questions, suggestions or ideas? Please share them with us.

Top 5 Reasons to Use NAS Backup Solutions for SMBs

Network Attached Storage (NAS) boxes are commonly used to add shared storage to small business network infrastructure. NAS backup is cost-effective, convenient, and user-friendly. Directly Attached Storage (DAS) infrastructure is also cost-effective and convenient. However, there are numerous issues associated with utilizing DAS or NAS as a standalone method for storage and redundancy, and multiple levels of redundancy are strongly encouraged. 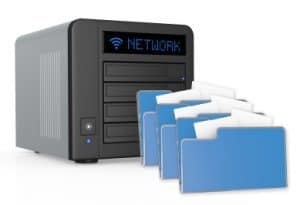 Top 5 Reasons to Backup to NAS:

Listed below are five reasons to consider investing in NAS and DAS appliances for backup storage and data protection.

NAS boxes are typically designed for local storage, and they are not designed for regular data transportation off-site. NAS boxes can be used as part of a comprehensive backup plan, or NAS boxes can include drives designed specifically for daily removal. NAS appliances also require motherboards, processors, RAM, chips, and other devices subject to mechanical failure. Multi-tiered alert systems and automated data duplication can be implemented in the event of suspected or imminent hardware failure.

Almost every NAS appliance can be used for backup. However, numerous high-rely designs for DAS are available. Different formats include Windows-based NAS and Linux-based NAS, some of which include automatic mirroring technology and the ability to quickly seed backup off-site or in conjunction with remote monitoring and management tools.

Automatic Mirroring Technology (AMT) provides features in select backup NAS products that are not widely available. AMT automatically copies every backup job to a removable drive, which is duplicated every time the drive is replaced. The jobs are sent to remote locations over the Internet, and redundancies are increased.

DAS backup systems connect drivers directly to an existing server with the use of a USB or eSATA port. Traditionally, an interface card could easily be added. In the past few years, numerous top manufacturers have made it more difficult to achieve full functionality with third-party software. NAS configurations connect to servers via Gigabit Ethernet, which runs at a raw data rate of 1Gbps, or frequently 150 to 300 BG per hour in real-life scenarios. However, DAS backup systems typically run raw data at a rate of approximately 300 to 400 GB per hour in similar scenarios.

NAS backup and DAS backup solutions can be an effective method for data storage as well as data redundancy when combined with a more comprehensive plan for backup. Cost-effective hardware that is available on- and off-site can offer necessary upload/download speed in addition to ease of use. Instead of opting to overhaul an existing network that meets most data storage needs, invest in supplemental hardware and software solutions that have necessary off-site capabilities.

Data storage and protection is intended to have multiple safeguards without interfering with mission critical operations. Reduce lag time and increase backup capabilities with the right hardware coupled with other data storage solutions that are likely to function with next-generation technologies.