With data growth at a record high, businesses face a significant challenge to find ways to keep their backup window in check. As data sizes increase, companies will require peak speed, performance and efficiency out of their backup solution in order to ensure that their backups do not become operationally disruptive. Taking this data into consideration, NovaBACKUP conducted two critical backup performance tests. Each test was designed to benchmark the performance of NovaBACKUP, compared to leading backup software providers Acronis and Symantec.

The first benchmark study looked at backups done with average-sized files, the second looked at backups with extraordinarily large file sizes. Both tests measured these key performance indicators for each of the competitive backup solutions:

The first benchmark test was based on a statistic that averages the most common backup job file sizes for small businesses; roughly 400,000 files for a total of 370GB before compression, storing the backups to an external device over USB 3.0 technology.

The results of this benchmark1 were reported as follows:

Not only was NovaBACKUP faster than Acronis and Backup Exec, it also required less CPU usage and memory to perform the exact same backup, using the exact same benchmarking environment. 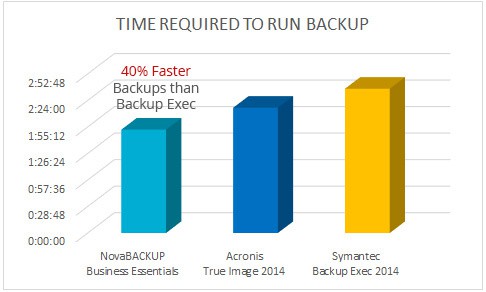 Here are the performance comparisons: 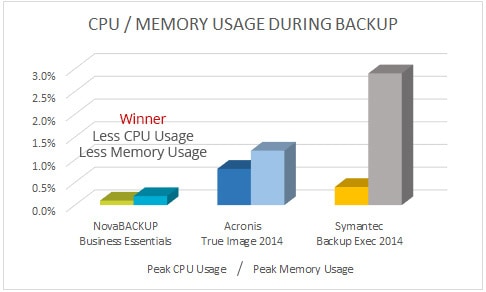 With the understanding that some industries within the small businesses world rely on very large files as an integral part of their business, a second benchmark study was conducted. This study was conducted using 250 significantly large files that were roughly 5GB per file, with a more limited throughput to an external storage device using USB 2.0 technology to see how NovaBACKUP stacked up against Acronis and Symantec.

The results of this benchmark2 were reported as follows:

For NovaBACKUP vs Acronis

Note: Symantec Backup Exec only runs on Windows Server OS, so when we ran it remotely through a VM, the time for a backup took over a day to complete. Once installing Windows Server 2012 R2 locally, the backups ran much faster, although still considerably slower than the other solutions.

The top performers in this test, NovaBACKUP and Acronis completed the backup of extraordinarily large files in roughly the same time, with NovaBACKUP leading the pack with the least CPU usage and peak memory usage. 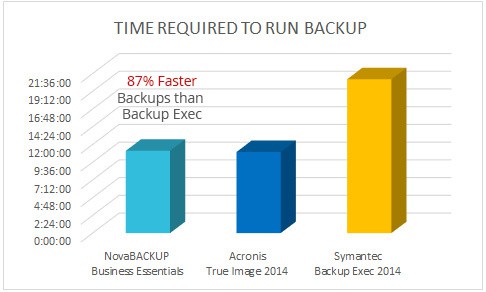 Here are the performance comparisons:

In order to maintain a consistent backup window, small businesses depend on the efficiency of their backup solution. There is a significant difference between a 10 hour backup window, which can be scheduled to run overnight, and a 20 hour backup window, which requires a weekend backup or encroaching on business productivity. In instances where IT intervention is required, like a job has to be rerun during normal business hours due to a software conflict or backup job failure, if your backup solution consumes excessive memory and CPU usage to perform your backup job, it will cost you in terms of additional productivity loss.

To stay competitive, backup software must be efficient enough to protect business data with minimal technology resource usage and in shared environments, without the need for a dedicated physical server. Poor performance comes at a cost that many small businesses simply cannot afford.

NovaBACKUP understands that small businesses are often short on time and resources, which is why it has become our mission to find ways to exceed our customers’ expectations. In addition to providing fast backups with minimal resource usage, we also offer unmatched customer support. NovaBACKUP is the only backup software company in the industry that offers remote installation and setup…at no additional cost to customers.

We recently performed benchmark study on backing up one million small files. Find out who won our One Million File Backup Challenge.

Test the software for yourself and let us know what you think. Download a free trial.